Heat And Your Computer 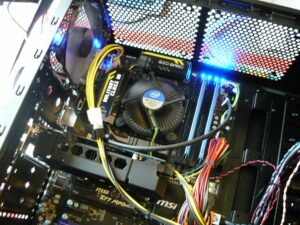 As we get an early start to the sweltering “Dog Days” of summer, people can be forgiven for moving a little slower. But did you know heat can slow down your computer’s performance too? Even in ideal conditions it’s important for your computer’s cooling system to be operating properly. In the middle of July, in Minnesota, when room temperature can mean upwards of 90 degrees, cooling becomes an even more important part of keeping your system running quickly and smoothly. In fact, heat management is an integral part of any computer design and users should keep a few things in mind when it comes to keeping their systems cool.

CPUs and graphics processors are two components that generate a notable amount of heat in traditional computers. Both consist of chips that make calculations based on electrical pulses travelling through their architecture—as these pulses flow through the chips, they heat up. CPUs normally have their own fans and as desktops and laptops alike have developed more graphics processing power it has become common for graphics cards to have their own cooling fans as well. Desktop power supplies also have their own fans due to the amount of juice flowing through them. Hard drives and CD drives have moving parts and can generate some heat of their own, but usually don’t have their own cooling mechanisms.

Alternatives to the “Fan Club”

There are ways to cool a system without fans. Liquid coolers are becoming more popular in high performance desktops—they consist of a combination of hoses connected to a radiator (like a smaller version of your car’s radiator) that sits over the processor. Liquid circulates inside this system to move heat away from the processor. Most computers also feature some variety of heat sink; a structure of folded metal designed to dissipate heat over a wider area. These heat sink structures are sometimes referred to as “passive cooling.”

So what if it’s hot?

Why is heat a problem for your computer in the first place? Most of the crucial components within your computer are comprised at least partially of metal and metal tends to expand, warp and change shape when heated. In other words, heat can destroy the most important parts of your system. Processors are designed with fail-safe systems. They will automatically engage “throttling” or slowing down their operation under warmer conditions. If they get critically warm, they might even initiate an abrupt emergency shutdown. So, the warmer a system is, the slower it will operate and the more likely it is to shut down while you are in the middle of something important. Or worse, your processor or graphics card could be irreparably damaged.

Keeping your computer cool will most likely extend its life. Try to avoid leaving laptops in hot cars or running computers in non-air conditioned rooms on particularly hot days. Yes, ambient temperature does play a major role in your system’s ability to manage heat. Avoid using laptops on your lap, or resting on blankets or other insulating fabrics (a hard surface is best). It’s also a good idea to make sure that your computer’s vents and fans are free of dust and debris. Invest in a can of air duster and give the vents and fans a thorough blow out (make sure the machine is off, unplugged and cool before doing this). Of course, if you have questions on how to play it cool this summer, you can always come talk to the techs at Mankato Computer Technology.