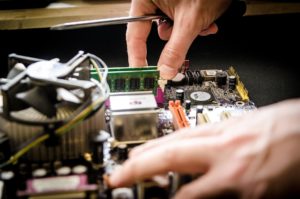 For every business there are overhead costs and facilities expenses. From plumbing to lights to the paper towel dispensers in the bathroom, every business owner is confronted with the question as problems arise: Is it better to fix this or replace it entirely? Computers pose a special challenge when considering this question, as few other tools are as integral to getting work done in the office environment. Here are some key points to consider when determining if it is better to fix or replace hardware in your office.

Understanding the scoped of the problem and having some idea of the expense involved in the fixing them is critical to making informed decisions on how to move forward. This includes knowing what the computer cost initially and what a replacement might run. When it comes to fixing problems with workstations (laptops and desktop computers) software is normally easier and less costly than fixing hardware problems. The advantage of business class machines is that, while they cost a bit more on the front end, they are higher performance and crucially, have longer warranties. The first thing you’ll want to do with a machine that seems to have hardware problems is to determine if it is still under warranty.

Have you ever had a friend or family member who seemed to have terrible luck with their car? Every couple of months something else seemed to be going wrong and at some point, you suspected that they were still paying for repairs when, if they were thinking clearly, they should trade the car in for a new one. There’s something to be said for getting your tech “just how you want it” but technology is by nature full of change and progress. We have encountered many small business owners who spend a tremendous amount of money keeping outdated systems running because they think the price of upgrading their proprietary software would be too much. This sort of delay in upgrade can cost more money in the long run and open the organization up to security loopholes and reduced efficiency from running clunky, outdated systems.

A good rule of thumb is if the computer is beyond three years old and has a serious hardware problem (hard drive or motherboard failure) it will normally make more sense to invest in a new machine rather than paying to replace the problematic component. The risk of repair goes beyond just spending money on a machine that is less than cutting edge; while the computer might have a brand new hard drive, all of the other components will still be years old and something else could fail down the road, making you wish you had pulled the trigger and replaced it when you had the opportunity.

Understanding the value and efficacy of technology can be daunting for those who don’t specialize in the intricacies of hardware and software. When something goes wrong it can be difficult to know if it is better to invest in a repair or a replacement. Having an IT team that you trust, which can steer you in the right direction, is invaluable for growing businesses that need to make their expenditures count. If you have questions about how to properly chart your IT course, call Mankato Computer Technology.