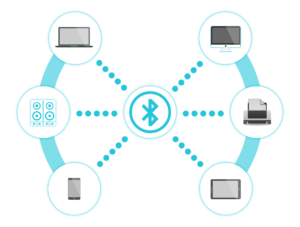 Our culture adopts buzzwords at an astounding rate—especially where technology is concerned. Those of a certain age will remember a time where seemingly overnight any handheld audio devices became a “Walkman.” As cell phones and smart phones ascended to their current place of crucial importance in our daily lives, people began tossing out the terms “4G” and “5G,” sometimes with only a tenuous understanding of what these designations signify. In the same vein, Bluetooth has become a household term and something that is available on many of our devices, but what exactly is this technology? How does it differ from say, a Wi-Fi connection and what functionality can it bring you in your daily interactions?

Bluetooth is, in short, a radio device. It is technology for linking devices over short distances using radio waves and transferring data directly from point A to point B, without a wired connection.

So, is this Wi-Fi? What’s the difference?

No, Bluetooth is not Wi-Fi. Wi-Fi works by using a centralized device (A router or an access point) that broadcasts a signal to create a network of devices within its range. Generally speaking, Bluetooth operates with a less powerful radio frequency that connects two devices directly (No router required). While this makes Bluetooth more energy efficient, it also limits the amount of data that can be quickly transferred. Therefor it is more suited to human interface devices (Keyboards, mice) or streaming audio than for applications like video streaming or large data transfers.

I know I’ve heard and seen this—Where’s my Bluetooth?

The first widespread consumer applications for Bluetooth were wireless headphones, followed closely by hands-free headsets for phones. Currently, Bluetooth is employed widely as a way to get our devices talking to each other. Many new cars have Bluetooth integration to link smart phones to the car’s stereo. Headphones and phone headsets are still going strong, along with mice, keyboards, game controllers, wireless speakers, GPS consoles, medical devices, barcode scanners in stores and myriad other cordless devices also use Bluetooth to connect.

Bluetooth is an efficient, direct and cordless way for information to get from point A to point B without a traditional Wi-Fi network. As the technology improves, developers have found ways to power Bluetooth sensors with sources as small as watch batteries for years, without additional charging. As the “Internet of Things” grows and expands, you can be sure Bluetooth technology will be present in many of the objects around us, allowing us to monitor and calibrate our environments in ways we have not even conceived of yet. For now, if you need help getting your devices talking to one another, you can always throw on your Bluetooth headset and call your friends down at Mankato Computer Technology.