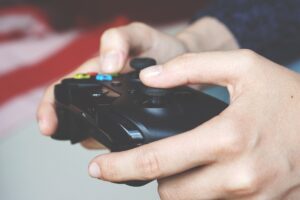 Since the early days of personal computing, gaming consoles and PCs have advanced along a parallel trajectory, gathering enthusiasts into both camps. What can be done on a console that can’t be done on a computer, and what value does a computer offer that can’t be found in a console? The debate is as old as the platforms themselves, but here are the things to consider when weighing the value of a gaming console vs. a PC.

One can be forgiven for a certain level of confusion because, technically, gaming consoles are computers, but they are computers with a singular purpose: to play games. The first consoles emerged on the consumer market in the 1970s, with the Atari and Magnavox Odyssey system. By the mid ‘80s the first Nintendo and Sega systems came on the market and reached an unprecedented level of ubiquity. For the purposes of defining terms: a console is computer that is built in a self-contained box, usually made to display on a television screen. The latest and greatest names in the console world are Nintendo’s Switch, Sony’s PlayStation 5 and Microsoft’s Xbox Series X.

A good analogy for the different approaches behind gaming computers and consoles is the difference between a big box store and a chic main street boutique. Consoles (the big box store) offer affordability, ease of use and low maintenance. A gaming computer (boutique) on the other hand is almost infinitely customizable, upgradeable and offers a range of options you can’t get with a console; the only limits are your budget and level of expertise.

How Does It Look?

Consoles are designed to plug and play with very little setup and to look good with smooth performance from the get go. That being said, when a console comes out and its hardware is brand new it will be offering resolutions that would have been available to high-end PC gamers for years. If you have the budget and technical know-how to purchase and configure a powerful graphics card for your computer, you will be treated to graphics quality that is head and shoulders above any console.

Does It Have My Favorite Game?

There are examples to point to for games that have been released for console only, titles that are developed for a certain platform and are never “ported” or adapted to be installed on a PC. Those titles are normally the exception, however. Most games will be released for PC and in myriad cases, especially games produced by “Indy” developers, there are titles that are only available on PC. By and large, the computer gamer will have a much larger variety of games to choose from. Services like Steam (an internet based game retailer) also offer PC titles for download at greatly discounted prices compared to the purchase cost of console games.

Anyone who wants to build their own gaming machine is quickly going to realize that they’re going to need to learn some tech skills. There are vendors who will build custom gaming machines to spec, but consumers will pay a premium to have someone else put it together. The other thing to consider is that there are more variables with a computer, more components, which means there is more room for error. A computer gaming enthusiast will very quickly become their own amateur tech support specialist, which for people with a certain personality can be fun and rewarding, while others might find it extremely frustrating.

Computers don’t just offer customizable hardware, the games you play on them can also be tweaked, changed, improved and transformed by tech-savvy gamers. Vast groups of gamers have formed online communities to develop and exchange “mods,” (short for modification) files that can be downloaded to add new features, looks, storylines and other changes to existing games. While some consoles allow users to create and download mods, the options for PC gamers are exponentially greater.

What Else Can I Do With This Thing?

For years now, video game consoles have been adding functionality beyond just playing games. One longtime function has been playing DVDs and network connectivity followed shortly thereafter, allowing users to play multiplayer with friends or strangers around the world. Many consoles now include web browsers and various streaming services like Netflix, Hulu and Youtube. But while consoles claw out some new territory, it is ground that PCs have occupied for years. In short, a computer can do everything a console can do and more.

Devoted gamers on either side will likely never come to a consensus on which platform is superior, gaming computers or consoles. The takeaway is really this: consoles are more budget friendly, affordable and a bit more user friendly, while PCs can achieve unparalleled performance, customization and variety if you’re willing to put the time and resources into it. Of course, if you ever need assistance building the gaming machine of your dreams, you can always turn to Mankato Computer Technology for guidance.