Surge Protectors: How to Weather the Storm 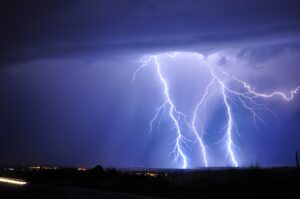 Although it’s been a relatively uneventful severe weather season in Southern Minnesota we’ve still seen an uptick in the number of customers who come into the office with damaged power supplies or other more major hardware problems resulting from lightning strikes and power surges. This underscores the need for a high quality, working surge protector. Here are some things to remember when trying to safeguard your electronics from electrical surges:

All surge protectors, regardless of make and model, should have an indicator light that shows that the device is still functioning properly. If this light is no longer showing it’s time to think about replacing it.

All Power Strips Are Not Surge Protectors

Occasionally we deal with customers who are mystified that their surge protector was of no help during a storm, only to eventually discover that they were using a simple power strip that did not have any protective hardware in it. Surge protectors should always have an indicator light and the word “Protection” written somewhere on it.

A simple surge protector is different from an Uninterruptable Power Supply (UPS). While a surge protector contains electrical components that route excess electricity through a secondary path, they do not by default generate their own electrical charge to power devices in the event of an electrical outage. The more expensive and elaborate UPS is a device that contains a battery powerful enough to run your devices for a short period during an outage, giving the user time to save work and complete a normal shutdown.

What do we recommend?

Here at MCT, we sell Tripp Lite surge protectors that are simple, reliable and at less than $20 a piece, won’t break the bank. It should be said however that while surge protectors offer some protection they are only effective up to point—if your house or office sustains a direct lighting strike there is likely not a surge protector out there that can guarantee 100% protection. That’s why it is always crucial to back up your data, either with an external hard drive that is kept disconnected from the computer, an off-site cloud-based backup, or better yet a combination of the two.

Surge protectors are a bit like insurance—it is something you buy in the hopes that you won’t have to use, but most people won’t really understand their value unless the worst happens and they don’t have one. If you have questions about how to keep your hardware and crucial data safe, come see us at Mankato Computer Technology—we’ll help you in a flash.