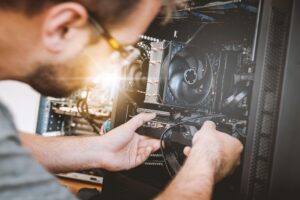 Computer specs can be difficult to make sense of for the non-tech-savvy user. Specs take the form of a slew of numbers and letters, denoting something but not signifying much to those who only need to think about them on the rare occasion that they are shopping for a new computer. This is further complicated by the fact that hardware continues to improve and evolve, software becomes more robust and demanding, prices fluctuate and the benchmarks for what is “normal” seem to change every couple of years. So, what is a good computer in 2022? What do the numbers and letters mean and what should you be looking for when shopping around for a machine to fit your needs?

There are two factors to consider when talking about computing speed; the RAM (or Random Access Memory) and the processor. We’ll discuss processors a bit later—but for now let’s talk RAM. Windows 11 is the latest and greatest operating system from Microsoft and anyone looking to purchase a new PC should buy one that can run 11. Microsoft says the minimum RAM required to run Windows 11 is 4GB, but this is the bare minimum. If you want something that is going to operate well and remain fast for years or you are planning to play games, run intensive accounting or design software, you’ll want to be thinking 8GB or up.

The Right CPU for You

Processors, or CPUs (Central Processing Unit) are one of the more misunderstood components of what makes a computer work. While many people are familiar with RAM and storage space, the details of what makes a processor powerful can be somewhat elusive. For our purposes, we’ll be talking about Intel processors, the most ubiquitous and well-established manufacturer. The latest iterations of the intel processor for consumer and business class computers are the i3, i5, i7 and the newest i9. Generally, the i5 will have more cores and faster clock speeds than the i3 and that trend continues up the line. So in most cases, the higher the “iNumber”, the better—with one major caveat. Each version has had multiple generations and the performance of the chip improves with every release. Therefore, a generation 7 or gen 9 i3 can come a lot closer to the performance of an old i7 (generation 4 or 5) than one might think. So, whichever version of the chip you go with, be sure you are getting at least a gen 9, or the latest gen 11. High performance users should look for a late generation i5 or higher, while those who just surf the web and do word processing can likely get by with an i3.

How Much Storage Is Enough?

The price of storage per gigabyte has fallen dramatically over the last decade, so it is now easy to find an affordable machine with a 1TB hard drive (or 1,000 Gigabytes). The average user will come nowhere near to filling that in the life of the computer, but for gamers who typically install games that can take up 30-100GB, people who create media (musicians, photographers, videographers), or those who want to maintain a big media library, you might look at upgrading to a 2TB drive. On the extreme budget side of things, certain manufacturers have begun marketing machines with very stripped-down specs to achieve a previously unheard-of price point (around $200 for the HP Stream, for example). Some of these budget machines are shipping with hard drives integrated into the motherboard (which means no replacing or upgrading the drive) that are comically light on storage space. A 34GB hard drive, running Windows 10 will quickly fill up with just the system files and updates, rendering the machine almost unusable. Steer clear of these machines and spend a little bit more on the front end for something with enough storage to actually keep your system up and running.

The biggest thing you can do to ensure your computer will operate quickly is to get a machine that has a solid state drive (SSD) as the primary storage device. SSDs tend to be more durable and perform much faster than traditional spinning drives. This means boot speeds, file transfer speeds and just about every other operation is more efficient with an SSD. In past years users paid a premium on SSDs but the prices have come down significantly, making them far more affordable. If you are a high data user, it won’t break the bank to go for a 1TB SSD, but the typical user can probably get by with a 250GB drive. Many gamers and data hoarders that use desktop computers have embraced the practice of using an SSD to host the operating system and purchasing a larger capacity spinning drive to serve as secondary cold storage. Whatever configuration you settle on, one thing is for certain: an SSD is a must for any new computer. Once you see the difference in performance you’ll wonder how you ever got by without one.

The author Arthur C Clark famously quipped that “Any sufficiently advanced technology is indistinguishable from magic.” Our computers can often seem that way; as long as they are working, most of us don’t need to worry too much about what is under the hood. A little bit of research goes a long way however and with a little investigation, you can properly interpret those strings of letters and numbers in a way that keeps your magic running smoothly and reliably. If you need help making sense of computer specs, or just want some further guidance on what would constitute a “good computer” for you, come see us at Mankato Computer Technology.